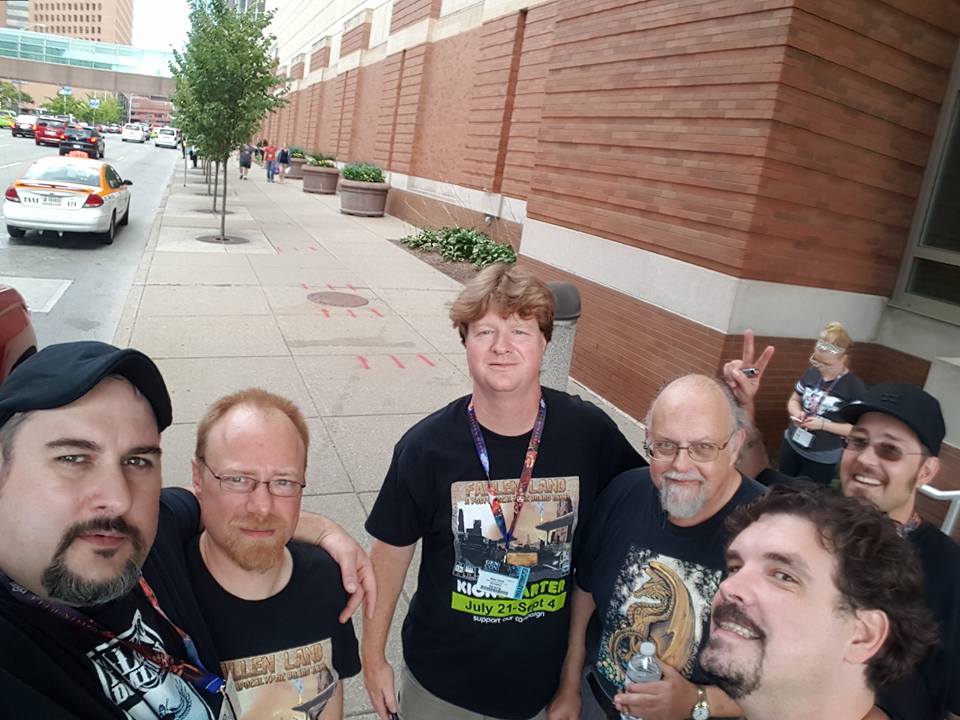 Creating Fallen Land: A Post-Apocalyptic Board Game and its first expansion, A Journey Into Darkness has been one hell of a roller coaster ride, for all of us.  And I mean that in every possible sense of the term.  Our journey from start to finish has taken over thirteen long years.  At its high-points were moments of elation and triumph, when the cohesiveness of our team allowed us to meet important deadlines and finalize portions of this immense project. However, sometimes it sank to dark depths.  Infighting, the loss of friendship and the sudden death of our 2nd Editor In Chief and friend, Eric Lemke occurred.  Tragic events like this made us question EVERYTHING and often had a negative impact on the project felt for many, many months.  However, we would always get back on track, pull together again as a team and rise above these challenges.

The projects humble inception was in the sweltering heat of a garage, in Iowa.  The creative process ebbed and flowed during these long creative sessions.  I started to write.  And write, while Sean Cahill began laying out design templates.  We quickly realized that we needed a better work space and a few years later, a staff to help us actualize the game.  Warren Ripley was the first to join us in 2007.  He brought to the table his phenomenal original artwork, graphic design skills and patient dedication. The innumerable pieces of artwork for the game have all crossed his desk (most on more than one occasion).

Beau Fairchild joined us next; a long time friend and early prototype Editor, from 2008-2011.  Patrick “Tall-Pat” Phillips also hit the scene in 2008, quickly earning his role as our Lead Play Tester, through his enthusiasm, meta-gaming and proof reading prowess.  Pat also helped us iron out the kinks, organize game sessions and rally the troops. “A CARD LAID IS A CARD PLAYED, DAMMIT!”

The brilliant artwork of Carter Allen and Joe Lower, were important catalysts in helping us to bring the world of Fallen Land to life. The sheer volume of their art for the game is massive.  And until his tragic death in 2012, Erik Lemke’s role as our second Editor brought to the studio his enthusiastic expertise and remarkable professionalism.

Justin “Bonz” Jones, an avid play tester back in 2007, re-joined us in 2013, as our Mechanics Analyst.  He helped us review and critique our gaming system, trim the decks and make the “hard” final cuts.  In 2016 Bill Pitcher (a one man army), joined us as a senior Play Tester and Analyst, but quickly earned his position as our 3rd Editor in Chief and Chief Information Officer.  And the list goes on and on, to include important figures like Shannon Stauffer, Alison Werner Smith, Paul Waterman, Kent Anderson, Justin Brown and Molly Rossiter.  Not to mention the many, many others who helped us with their kindness, wisdom and advice.

To everyone who believed in us and contributed to the project, thank you!  Especially those who stuck with us through the project’s many mercurial patches.  Most importantly, we want to thank our wonderful families (especially our wives Wendy and Tara), who were patient with us throughout this long process.  They encouraged us and lent their moral support throughout this endeavor.  Thank you!

Looking back on the experience as a whole, it was everyone’s combined efforts that made Fallen Land possible. Now, over thirteen years and countless hours later, we are pleased to present to you the first of several upcoming releases for the studio, Fallen Land: A Post Apocalyptic Board Game and its first expansion, A Journey Into Darkness.  We know you will enjoy playing them as much as we enjoyed creating them for you.